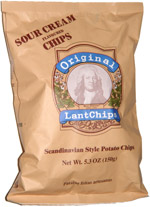 Taste test: These were possibly the crunchiest potato chips we've ever tried.

At first glance, they looked like typical kettle-cooked chips, such as Cape Cod chips, but with just one bite it became clear that these were slightly thicker and had an extra order of magnitude of crunch. The sour cream flavor was mild but good, and there was lots of nice potato flavor, kind of like a baked potato.

From the package: “Our LantChips Scandanavian style potato chips have been sold in Europe for many years. They are some of the best chips made over there. Thick cut, with a rich taste of potato, and a distinct flavour, influenced by one of the traditional Scandanavian ways of eating the potato, cut into coarse strips, fried in butter and eaten with lingonberry and also sour cream. A delicacy now, but long viewed as the poor man's food.”

This snack was discovered by Jeremy at IKEA. Review published .