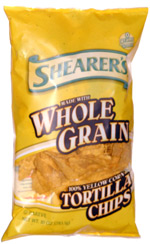 Taste test: These triangular tortilla chips were pretty good, with a nice corn taste, but they were generally fairly flat and kind of brittle, which was less than ideal for dipping.

The taste was a little different from that standard non-whole-grain tortilla chips, but really not very different. The texture was a bit grittier, but not bad at all.

This snack was contributed to Taquitos.net by the manufacturer. Review published March 2006.