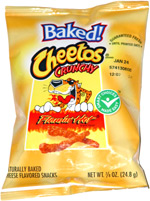 Taste test: These Cheetos had an impressively bright glow from the red flavor powder on them.

The taste was not as good as non-baked variety of Flamin' Hot Crunchy Cheetos. There was less corn taste, and the hot cheese powder seemed flatter without the corn flavor. The baked version had a different texture too, very crisp but not as crunchy. There was a good hot aftertaste. Overall, these were not bad, and I would rather eat these than many other things, but they were noticeably less good than the original.

Smell test: Not much. Not like a cheese puff or hot sauce.

From the package: “When choosing a cheese flavored snack, Baked! Cheetos® brand Cheese Flavored Snacks are a smart choice because they are reduced in fat compared to regular Cheetos® Snacks and a one ounce serving has 0 grams of trans fat and 1 gram of saturated fat.” ... According to the bag, a 7/8 oz. serving of these has 4.5 grams of fat and 120 calories vs. 10 grams of fat and 150 calories in the non-baked version. It also claims that both versions have 100% taste.