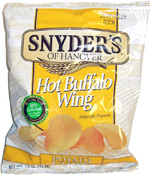 Taste test: Previously, Snyder's made this flavor of a plain potato chip, but this new version adds ripples.

(As Buzz Aldrin said on the Simpsons, "Careful! They're ruffled!") Sadly, this small bag didn't have large chips and was only half full. The heat of the chips kicked in fast, so have the water handy if you don't like your tongue getting burned. We couldn't taste the blue cheese that the bag had advertised. Although one taster said there was a creaminess to the flavor, most said this was all Buffalo wing flavoring. I did like the rippled style better than the plain version. They also seemed very salty.

From the package: “Snyder's of Hanover was founded on a commitment to making the world's best-tasting snacks. You'll love Hot Buffalo Wing Chips. Made from the finest potatoes and seasoned with hot sauce, cayenne pepper and blue cheese, they provide a real red-hot taste experience — perfect as a snack or side.”