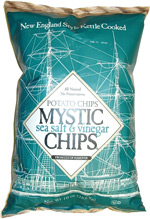 Taste test: These kettle-cooked potato chips had a vinegar taste was not overpowering to the point where your eyes will squint, and the oiliness of the chip worked well with the vinegar.

A lot of salt on the chip rubbed off onto the fingers, as the sea salt had bigger "chunks" than normal salt, so keep a napkin handy. We could taste some strong vinegar by licking the powder off first; otherwise, the kettle-potato flavor dominated. I'm on the fence as to whether these are better than Cape Cod's salt and vinegar chips. I may have to have an in-office chip-off to see what co-workers think.

Smell test: A good aroma of vinegar wafts upward from the bottom of the bag, teasing your nostrils with its vinegary goodness.

From the package: “The potato chip was invented in 1853 by George Crum, a Native American. Respoinding to a customer's complaint that the French fries were 'too thick,' Crum sliced a batch of potatoes, fried them to a crisp in lard, sprinkled them with salt, and sent them back to a delighted Cornelius Vanderbilt. An original American food had quietly been discovered at a time when shipbuilding was an active industry in maritime America. Nearly 200 years later, the original New England Potato Chip is back. Mystic Chips made their maiden voyage at Mystic Seaport, America's leading maritime museum, where a 19th-century village of historic buildings and tall ships recreates the era when George Crum salted his first potato chip. Mystic Seaport is also home to exhibit galleries brimming with the culture of seafaring lives and a unique shipyard where the nearly lost art of wooden shipbuilders endures. Mystic Seaport visitors, connoisseurs of authenticity, loved Mystic Chips from the first crunch. The rest, as they say, is history.”

This snack was discovered by Keith at Stop & Shop. Review published January 2006.