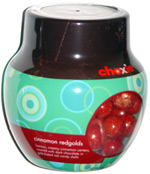 Taste test: These spheres were about half an inch in diameter, with a soft cinnamon center and a chocolate shell.

The shell had a red coloring on the outside, partially covered by some sort of gold-colored substance. They tasted quite good, as the unusual combination of cinnamon and chocolate actually worked quite well. Very good snack, kind of addictive.

Smell test: A bit odd at first, but on second whiff, it smelled like cinnamon candy with a little chocolate mixed in.

From the package: “luscious, creamy cinnamon centers, covered with dark chocolate in gold dusted red candy shells” ... “there's chocoate, and then there's choxie. crafted with finest and purest ingredients, it's intended for the most sophisticated of chocolate palates. we suggest you keep it from amateurs, and keep your choie for youself.”

This snack was discovered by Jeremy at Target. Review published February 2006.