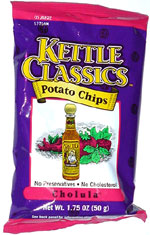 Taste test: These are fairly hot chips, and they taste just like their namesake hot sauce.

They're not the hottest in the world, but they do have a lingering aftertaste. Nice crunch. Lots of flavor powder on these, some of which is likely to stick to your fingers. The major negative was that there were barely any chips in the bag. Kettle Classics potato chips bags seem to be on average two-thirds or more empty.

Smell test: Smells like hot sauce, but not really hot. 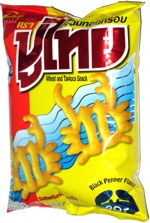