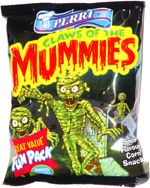 Claws of the Mummies

Taste test: These corn-based snacks seemed to be a Halloween-themed version of Monster Munch or Mighty Munch, with a tangy snack shaped like a footprint, in this case with four toes (or fingers) and a hole in the middle.

But the only thing that really had anything to do with Mummies was the picture on the bag. They were tasty, tangy and pretty good.

From the package: “Spice Flavour Corn Snacks” ... “Baked Not Fried”