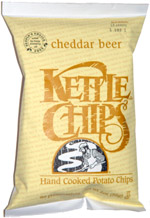 Taste test: Like all Kettle Chips, these were thick, crisp and had a great crunch. They also tasted quite good, with a rich potato taste, but there was just a slight cheddar flavor, far less than many other cheddar-flavored chips, and no taste of beer that we could notice.

From the package: “A people's choice flavor” ... “voted by many, craved by all” ... “When we came up with the notion of asking our fans to share their ideas for a new flavor, we had no idea that over 16,000 of you would have suggestions.”