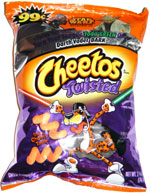 Taste test: These spiral-shaped cheese puffs were fairly dense but crisp and a had a good cheese taste with a mild crunch.

The cheese powder coverage was uneven, but the powder was a very bright orange. The deal with them is that when you eat them, your tongue turns either green (indicating you're a jedi, such as Yoda) or dark (indicating you're a sith, such as Darth Vader). It wasn't clear from the bag whether all the puffs in the bag were supposed to turn the same color, or whether it was a puff-by-puff decision. All the ones I bothered to check turned a dullish green, nowhere near as bright as the Chester Cheetah tongue pictured on the back of the bag. Since most people don't ordinarily eat in front of a mirror, and since it's unpleasant to look at other people's tongues, the whole exercise seemed kind of pointless.

From the package: “Join Chester Cheetah® in some Star Wars™ fun 'cause Twisted® Cheetos® brand snacks now color your tongue either Darth Vader™ Dark or Yoda™ Green. Find The Force™ inside you ... that's never been seen!!! And when you're done with the color don't worry there's hope rinse your mouth out with water and hands off with soap.”

This snack was discovered by Jeremy at Dollar Tree. Review published November 2005.