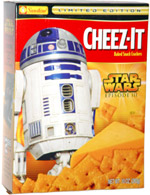 Taste test: The crackers in this box were just regular square Cheez-Its, as all that Star Wars stuff on the box turned out to be nothing more than movie promotion. I was hoping for crackers in Star Wars shapes, such as Darth Vader, Yoda, C3PO, Emperor Palpatine or General Grievous.

Fortunately, the Cheez-Its tasted very good, with an appealing salty cheese taste. There's something addictive about Cheez-Its. Maybe the Force is with them.

From the package: “In Star Wars Episode III: Revenge of the Sith, the final movie in the galactic saga, you can join your favorite characters one more time — and witness the ending that started it all!”

This snack was discovered by Jeremy at Market Basket. Review published February 2006.