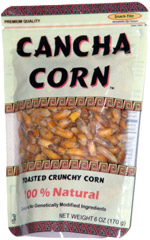 Taste test: These toasted corn kernels were noticeably taller than any other type of corn I've seen.

The level of crunch varied quite a bit from kernel to kernel, with some being crunchy but crisp, and others a bit chewier than I would prefer. They had a dry, somewhat salty corn taste. Nefesh Foods told us that Cancha Corn is "best eaten with something cold to drink, and with beer, it is unsurpassed" so I brought it to the running club/drinking club to allow a broad spectrum of people to try it with beer. Some people liked the Cancha Corn a lot, quite a few were just baffled by the whole concept and didn't know what to think, and a few didn't like them at all (but some of this subgroup seemed to continue eating from their handfuls of Cancha Corn as they told me this).

From the package: “Contains No Genetically Modified Ingredients” ... “An ancient variety of corn bred millenia ago by Pre-Inca civilizations and is considered to be among the Grandfathers of modern corn. Grown today in the same step plateaus that were carved in remote history, the Andean farmers who tend to this crop put in the same loving care nurtuting this corn as we put into making it.”

This snack was contributed to Taquitos.net by the manufacturer. Review published January 2006.