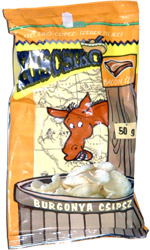 Taste test: Despite their name, these were potato crisps, not potato chips.

They seemed to be themed on the American west, as the front of the bag included a map of Colorado, Texas, Kansas and New Mexico, with renderings of cowboys on their horses lassooing cattle. The crisps were nearly white in color, irregularly shaped, and very light and airy, with a nice but mild bacony taste. Really just slightly bacony, but quite a nice overall taste.

From the package: “Store in a cool dry place!”

This snack was discovered by Amitai in Budapest. Review published .