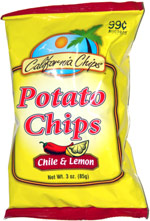 Taste test: These chips had a good potato taste on first bite, but once the flavor powder started to kick in, the taste went downhill.

The combination of chile and lemon wasn't awful, but it just didn't have many fans around the chip bowl. There was a bit of heat to the taste, and quite a bit of heat in the aftertaste.

Smell test: Not much of an aroma, not bad, but not like chile and lemon.

From the package: “These chips aren't a chip off the old block! California Chips are a delicious slice of an era when fresh snacks were produced with traditional kitchen values. We think you'll find out chips as as real and unique as the state that inspired them.”

This snack was contributed to Taquitos.net by the manufacturer. Review published August 2005.