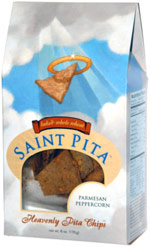 Taste test: These were thinner than many pita chips, and they were crisp and quite crunchy, but brittle enough to bite into easily.

Most of the chips were broken into fairly small pieces. The taste was outstanding, with a ton of very fresh parmesan and black pepper flavor, plus a lingering peppery aftertaste. The bulk of the flavoring was on one just side of the chips. The level of flavoring varied somewhat from chip to chip, but you could easily tell where the flavor was because you could see the orange-yellow cheese and the black pepper. I guess you could dip these, but there was so much flavor that there's really no need.

Smell test: Nice black pepper smell, and you can really taste the parmesan cheese too.

From the package: “Saint Pita, like most of us mortals, had grown bored with His Daily Bread and went looking for a new device to move his favorite dips from bowl to mouth. Looking about, he noticed talented young Dana, toiling away ...”

This snack was contributed to Taquitos.net by the manufacturer. Review published July 2005.