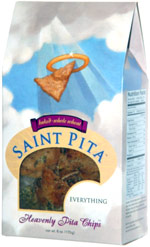 Taste test: The branding of this flavor of crunchy pita chips confused things a bit, as "everything" flavor could mean a lot of different things (or nothing).

The ingredients included Romano chese, parsley, sesame seeds and poppy seeds. Most of the sesame and poppy seeds didn't adhere to the pita chips well, so they had fallen to the bottom of the bag. The taste was pretty good, with cheese and salt being the most dominant tastes. But the other two varieties of Saint Pita that we tried were better.

From the package: “Saint Pita chips contain no nuts; they are baked in a commercial kitchen, which may bake other products containing nuts.” ... “Saint Pita was nervous as the angel with culinary responsibilities (and patronly saint of bakers). He wondered how in heaven's name he could make everybody happy. After all, everyone had lived their lives in different continents and countries — all with their own distinct herbs, spices and other bounty ...”

This snack was contributed to Taquitos.net by the manufacturer. Review published August 2005.