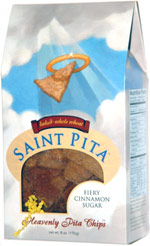 Taste test: These pita chips were thin, crisp and crunchy.

They didn't have as much cinnamon sugar as some other cinnamon pita chips, but there was still just about enough to make them quite tasty. The good part was that there was a hint of cayenne pepper mixed in, giving them a hot lingering aftertaste. Not super-hot by any means, but pretty nice.

From the package: “Saint Pita, formerly known for several millenia as Saint Peter, was one day dipping into his favorite ice cream ... Heavenly Hash, of course ... and suddenly he had a divinely inspired idea: A sweet deviation on the pita chips he adored. ... ”

This snack was contributed to Taquitos.net by the manufacturer. Review published July 2005.