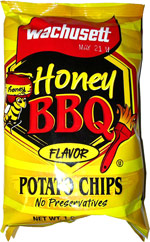 Taste test: Wachusett doesn't seem to make this flavor in a regular size bag, as I've only seen a 1 oz.

bag available at deli counters and the like. So there weren't a lot of chips in this bag to begin with. These looked like normal Wachusett potato chips (flat style, not a lot of curves on them) with the level of flavor powder per chip ranging from a little to quite a lot. At first, I was turned off by the taste, as it didn't remind me of barbecue at all, but after eating a few there was a sweet barbecue taste, and there was definitely honey in the flavor. It's almost like they took a smokey barbecue powder and then added a honey powder. There was an abundance of powder left behind, an orange-yellow type of granular sugary residue that ended up on the fingers. So have a napkin handy. Overall, an average chip taste.

Smell test: No barbecue smell per se, more like a salt and potato smell.

From the package: “Since 1939 the Wachusett Potato Chip Co. has been a family-owned business. Drawing its name, WA-CHU-SETT, from two well known central Massachusetts landmarks near our corporate facility, our name is now recognized throughout New England. We pride ourselves on the quality of our products. Great care is taken to choose specially selected varieties of potatoes from Florida, North Carolina, Virginia, New Jersey, Rhode Island and Maine. The result, potato chips that meet our standards of excellence ... and yours!”

This snack was discovered by Keith at Ben's Deli, Southborough, Massachusetts. Review published .