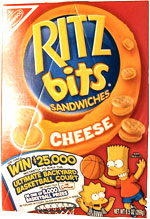 Taste test: These sandwiches were anchored by two miniature Ritz crackers, with a layer of cheese in between.

The cheese was the same kind that they use to fill up Combos or put in those orange cracker sandwiches. It was a non-offensive cheese taste. The best way to eat these is to just crunch into the Ritz and cheese combination in one bite, but you could also play with these like an Oreo cookie, twisting open the cracker part and licking the cheese. But that seems like too much work. If you're in an airport and don't feel like getting a hot lunch or dinner, grab some of these to bring onto the plane with you, as it's much better than anything they're going to give you on the plane.

This snack was discovered by Keith and Melissa at Price Chopper, Worcester, Massachusetts. Review published July 2005.