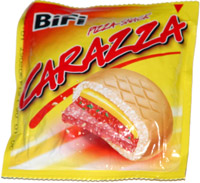 Taste test: This was basically a round mini-sandwich, about 3 inches in diameter, filled with salami, cheese and pizza sauce, and fully sealed on all sides by the wrap-around bread.

The fillings didn't look nearly as nice upon biting in as they did in the idealized picture on the package, but the taste was actually very good. I could taste the salami and maybe a little bit of the cheese, but the pizza sauce was the dominant taste. If you need a quick, cheap snack that covers multiple food groups, this could be a good choice.

Trivia: This cost 1.90 CHF (Swiss Francs), or about US $1.50. It was one of several snacks that I purchased at the airport before leaving Switzerland to get rid of some remaining Swiss currency.

This snack was discovered by Jeremy at Zurich Airport. Review published .