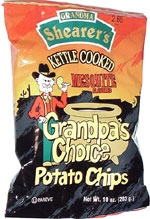 They're very crunchy kettle-style chips with a sweet and very flavorful barbecue taste. The mesquite is barely noticeable, or at least very subtle.

From the package: “Well, all people have their area of expertise, and I guess, mine is potato chip eatin'. Heck, I'da probably traded my wife away for a good bag of 'em a long time ago if she wasn't such a good cook. So good that the ladies at the County Fair take a little step backwards and kind stare at the dirt when she walks by ... as my grandson Tommy says, 'She's awesome.'

"Time went by, as it does all too fast when you're my age, and after 3 years of potato chip recipes and me tellin' her, 'Nope, not yet,' she was at it again when my grandson Tommy came visitin'. He presented Grandma with a wooden spoon (about the size of a fryin' pan) that he had whittled out of Texas Mesquite wood while on a Boy Scout outing.

"Little Tommy took it hook, line and sinker when I told him how much Grandma neede a magic spoon to help her with her cookin'. But old Grandma is short on temper and long on words, and when she finally got through yellin' at me, she remembered her potato chips ... and Tommy!

"Well, that did it. Tommy had been standin' there the entire time with that kettle of potato chips and peanut oil stirrin' and stirrin' with that goofy lookin' spoon and that stupid lookin' grin on his face. I started to laugh, Garndma started to cry, and Tommy just kept on stirrin' ...” (That's about half the story. I'm tired of typing it in and would rather eat a few more of these.)