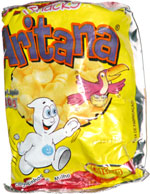 At first, they didn't really taste like anything, but after eating some more of them, it seemed like maybe every other one had some flavoring on it. It was sort of a sweet taste, maybe slightly tomatoey, that could perhaps be loosely interpreted as a ketchup flavor, but only very loosely.