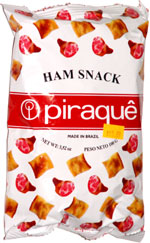 Taste test: This bag was chock-full of small crackers shaped sort of like the "document" symbol used in flow charts, except that two edges instead of just one were wavy.

The crackers had a mild ham taste to them. People around the chip bowl were scared off by the ham flavor in the name, but in reality these crackers were pretty good.

Smell test: Wow, these really did smell like ham. Good.

From the package: “Store in a cool dry place/Conservar en lugar fresco y seco” ... “Made in Brazil by Piraquê”