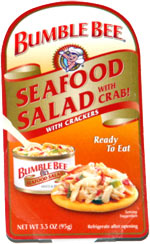 Taste test: This pack included a small can of seafood salad, a bag with six crackers, and a tiny spreading spoon.

The actual salad bore no resemblance to the picture on the package. The picture's salad was mostly white, but in reality, nothing in the salad was white, as the dominant color was pinkish beige. The salad tasted just about the same as Bumble Bee's chicken, tuna, ham and egg salads. If it didn't say "seafood salad" on the package, I would never have guessed. It was edible, but it was by no means a good seafood salad.

From the package: “With Crackers” ... “Ready to Eat” ... “Refrigerate after opening”

Trivia: Ralph Wiggum would appreciate this snack, as the can, cracker bag and outside packaging each had a picture of a bee. (The bee was wearing a chef's hat, and he appeared to have stolen Waldo's shirt.)