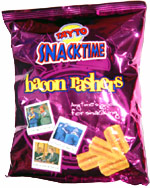 Taste test: These corn-based snacks were shaped and colored to roughly resemble bacon, but they were too thick and too straight to really look like bacon.

Smiths Bacon Flavor Fries simulate the look and feel of bacon much more convincingly. These did taste a lot like bacon, but they received mixed reviews around the chip bowl. Some people noticed an odd aftertaste, and one of our tasters thought there was a pine-like taste.

Smell test: Wow, these really did smell like fresh-cooked bacon. The non-greasy kind.