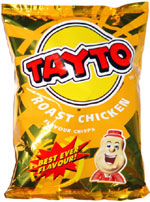 Taste test: These potato chips were thick and crisp, and Tayto generously packed a whole lot of chips into this tiny bag.

They really did taste like roast chicken. Some tasters were skeptical at first, but once anyone took a few bites, these chips became a popular choice around the chip bowl.