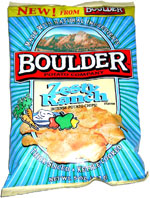 Taste test: Not a good taste.

There's supposed to be a ranch-style taste to these, but I think the thoughts about the smell (see below) overpowered my taste. These actually do taste like moth balls, I think. The chip itself is OK, good crunch, but the taste and smell totally turned me off. I could only eat a few of these before unleashing them on the co-workers.

From the package: “According to culinary legend, the potato chip originated in 1853 at a fashionable New York restaurant when railroad magnate Cornelius Vanderbilt sent his potatoes back to the kitchen, complaining that they were too thick. Annoyed, chef George Crum scornfully sliced some potatoes into a kettle of boiling oil and fried them to a crisp. The result was a hit and the potato chip was born. Since 1994, our family has operated the Boulder Potato Company in Boulder, Colorado. Using a simple family recipe, we kettle-cook select potatoes in small batches using sunflower and/or safflower oil. We use totally natural ingredients, hand-rake every batch, and test chips at every stage of preparation to ensure quality and taste. We hope you enjoy our version of the original potato chip!”

This snack was discovered by Keith at Denver (Walgreens at the 16th Street Mall). Review published October 2004.