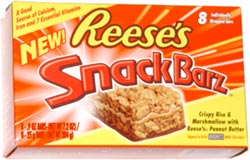 Taste test: This bar had four layers: on top, crushed Rice Krispies stuck together with melted marshallow; then a thin layer of peanut butter; then a repeat of the first layer; then a chocolate coating on the bottom.

This snack was discovered by Jeremy at Market Basket. Review published October 2004.