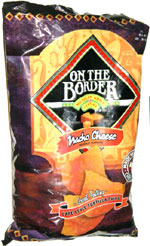 Taste test: These tortilla chips were quite large, bigger than Doritos, with an isosceles triangle shape.

They were crisp and crunchy and tasted very good, with a great cheese flavor that had kind of a taco-like taste and even some mild heat. There was also a lingering hot aftertaste. The first chip I grabbed appeared at first to be a giant chip, but it was actually two chips stuck together.

From the package: “Made with five real cheeses” ... “The answer to the taste you've been craving! It's Wisconsin wrangled into a Texas sized tortilla chip giving you ... Inside-Out flavor! Inside? Serious Nacho Flavor. Outside? Serious Cheese Taste! Add 'em up you get: Serious Cheese Taste! Very serious nacho cheese flavor!” ... “Meet Jack, Romano, Bleu, Parmesan, and Cheddar! (No Goats Allowed!)”

This snack was contributed to Taquitos.net by the manufacturer. Review published October 2004.