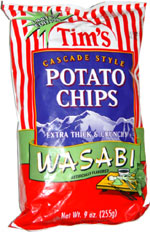 Taste test: These chips were super-tasty and, as with other Tim's chips, thick and super-crunchy.

The taste was a lot like wasabi peas. The level of wasabi heat and taste varied a lot from chip to chip, as some had a pretty good heat and some had hardly any. This was the first wasabi-flavored potato chip we ever tried. Another nice product from Tim's.

From the package: “Made in the Great Pacific Northwest. We've been cooking our potato chips in the shadow of the Cascade Mountains since 1986 using an old family recipe. With your first satisfying crunch, followed by the real flavor of premium potatoes kettle cooked, then perfectly seasoned, we think you'll agree that you have found what you have been looking for. We're intent on creating new & distinct flavors for our hand-crafted style chips. Wasabi is typically used in traditional Japanese cooking. It has the distinct flavor notes found in Horseradish. We've proven that a chip that crunches louder, tastes superior and satisfies better when prepared by people who take pride in a well-made snack. Many customers have told us that Tim's are the best potato chips they have ever eaten. Once you've tried them, we think you'll agree. Thank you for buying our product.”

This snack was discovered by Keith and Melissa in Hawaii. Review published .