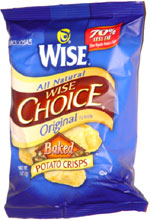 Taste test: These were a bit strange, definitely a new form of snack, barely resembling other potato crisps such as Pringles.

They were round, thick and sort of puffy. They were shaped kind of like mini-rice cakes, only different. Kind of styrofoam-like, but still crisp. They had a light feel to them and tasted kind of like Pringles, but with a slightly weaker taste. Not bad if you're looking for a light snack.

This snack was contributed to Taquitos.net by the manufacturer. Review published September 2004.