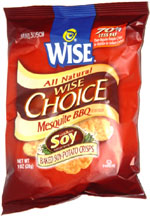 Taste test: These round crisps were shaped kind of like rice cakes, and they had a very nice barbecue flavor at first.

The crunch was slightly softer than the too-hard crunch of most soy chips, probably a result of the combination of soy and potato. Toward the end, there was some of the bad taste typical of soy chips.

This snack was contributed to Taquitos.net by the manufacturer. Review published September 2004.