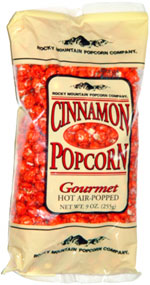 Taste test: This popcorn had a bright red sugary coating that covered nearly all of the kernels completely, with a few white spots in those hard-to-reach areas.

The taste was a slightly hot cinnamon, kind of like Big Red gum. When I ate several kernels in rapid succession, the cinnamon flavor got more intense, but it still was not overwhelming. The popcorn was crisp, and the candy coating added a slight crunch. There wasn't much popcorn taste, as the sugary coating dominated the flavor.

From the package: “Hot air-popped” ... “Experience the exciting taste of Colorado popcorn in all of our delicious flavors” ... “Old fashioned goodness!”

This snack was contributed to Taquitos.net by the manufacturer. Review published August 2004.