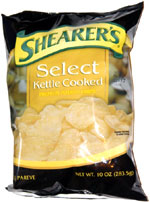 Taste test: These potato chips were quite a surprise.

They combined the characteristics of a couple of different kinds of chips we've tried before in a combination that was brand new. They had a taste similar to other chips cooked in soybean oil, which are generally very moist and a bit oily-tasting. But they were much crisper and crunchier than other chips that taste like that, so you get a texture and crunch that's a lot like Cape Cod potato chips, but a different taste.