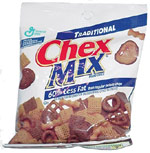 It's nothing spectacular, with kind of a doughey overall taste. After eating half the bag, I added some salt, and that helped a little, but I'd still recommend any of the other Chex Mix flavors over this "traditional" flavor.

Smell test: It's hard to place the smell. Kind of strange, but not that bad.

From the package: “60% Less Fat than regular potato chips” ... “See back for information on sodium and other nutrients” ... “Contains wheat, soy, peanut, sesame, milk and almond ingredients”

This snack was discovered by Jeremy at Cook's Crossing, Searsport, Maine.