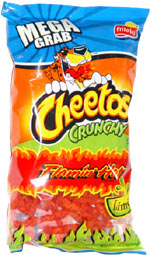 Taste test: These were a bit strange.

They had the regular Crunchy Cheetos shape and the same dark red color as the regular Cheetos Flamin' Hot. But they combined the Cheetos Flamin' Hot flavor with lime, and I'm not sure the whole was more than the sum of the parts. You could definitely taste the lime, and there was definitely some heat (it actually brought tears to my eyes) but mixing the lime with the hot cheese might not have been the best idea. It was a bold flavor, but not a particularly good one. I could feel the heat but not really taste it. Maybe lime fans would really like these, but I'm more of a lemon eater.

This snack was discovered by Jeremy at Wal-Mart. Review published August 2004.