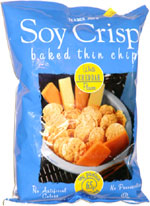 Some of our tasters liked them a lot..

Smell test: Kind of strange, but not actually bad.

This snack was discovered by Christine Guarrera at Trader Joe's. Review published August 2004.