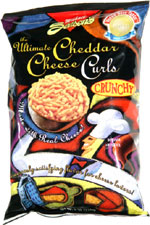 Taste test: These were great! They're Michael Season's version of the basic crunchy cheese curl, and the cheese taste was top-notch, definitely a standout among the crowded field of good cheese curls.

They really did taste like actual, good cheddar cheese. The curls were yellow-orange in color, closer to yellow than orange, so they were bright didn't have quite the fluorescent orange glow that some cheese curls have. There was a soft crunch, not as dramatic as the crisp crunch that you get from Cheetos. They left lots of orange cheese residue behind on our snackers' fingers, which made for a great secondary snack that could be licked off later. An impressive advance in cheese puffs.

From the package: “CHEESE! It's always been america's favorite topping for snacks. Now Michael Season's invites you to indulge in his Ultimate Cheese Crunchy Curl. A cheddar cheese curl that is pure eating enjoyment. Our crunchy curl is made with organic corn and then, while it's still hot, we let loose an avalanche of real cheese! Glorious, creamy, tangy, incredible cheddar cheese — and that's what makes this the finest cheese curl you've ever tasted. We used less salt too, so the natural cheese flavor really comes through.