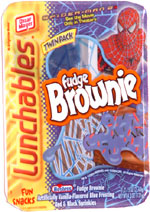 The idea is that you're supposed to put the frosting and sprinkles onto the brownie, and then eat it. Inside the main wrapper, the brownie was individually wrapped in a cellophane package with a blue spiderweb printed on it. I took a bite of the brownie before spreading anything on it, and it was below average. I then spread just about all of the frosting onto the brownie and dropped just about all of the sprinkles on top. This was a difficult, boring and nearly messy process. When I finally got around to eating it, I think the brownie tasted better with the toppings than it did without, but I'm someone who can really enjoy a good brownie, and I thought that this was nothing great.

This snack was discovered by Jeremy at Market Basket. Review published July 2004.