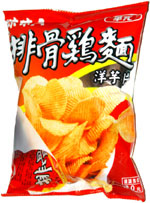 Taste test: These narrow-rippled potato chips were crisp and tasty, with a chicken-like flavor that resembled the taste of chicken-flavored ramen noodles. 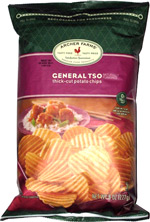 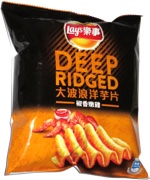 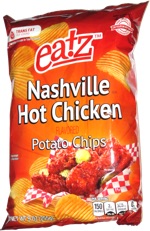 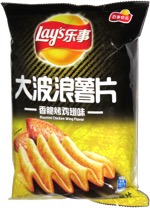 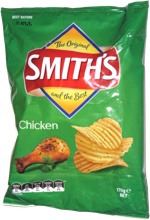 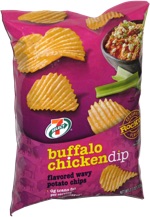 The flavor was definitely unusual, but it actually tasted pretty good. Most of the people sampling these around the chip bowl liked them. There was even a slightly hot aftertaste.

From the package: Just about the whole bag is in Chinese, except for a picture of a block of ramen noodles on that back bearing the words: “Wei-Wei 'A' Series Instant Noodles Chicken Flavor” the words “BHA TBHQ 200 PPM” interspersed among some Chinese writing. There's also a picture of one of those styorofoam noodle bowls that you're supposed to peel the cover off of and add boiling water to. But instead of being filled up with noodles, the cover is partially peeled of and it's overflowing with potato chips.

This snack was discovered by David Ferranti in Taiwan. Review published .