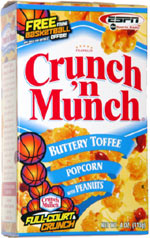 Taste test: This was a lot more peanutty then some of the more recent bags of Cracker Jacks that I've had, which had hardly any peanuts at all.

(They seem to have stopped selling Cracker Jacks in boxes.) Some of the peanuts were stuck to the popcorn kernels, and others were floating around on the own. I still like the overall taste of the caramel Cracker Jacks better than any of the butter toffee varieties. The Yankees have started selling Crunch 'n Munch instead of Cracker Jacks, and anything the Yankees are for, this Red Sox fan is against.

From the package: “Butter Toffee Crunch 'n Munch is the deliciously sweet and crunchy snack madd with big fluffy clusters of popcorn, crunchy roasted peanuts, and a rich butter toffee glaze. Serve Crunch 'n Munch at parties, while watching TV, for a late night snack, after school — it is a snack that your whole family will love anytime!”

Trivia: This box was a great deal for 69 cents!