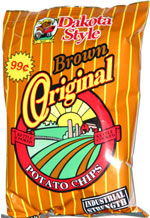 Taste test: These chips were loaded with great, salty potato flavor and had a heck of a crunch to them.

The look and texture was similar to Cape Cod chips, except that these were more irregular and crunchier. The chips were about half yellow and half golden brown (with most chips containing both colors). If they were crisper, they would have been perfect. Unfortunately, there was a slightly gamey texture to the chips in both bags that we tried, just not crisp enough.

From the package: “No Cholesterol” ... “To make a better chip, start with a better potato. To guarantee it, we grow our own near Clark, South Dakota. Then we scrub them, slice them extra thick and open-kettle cook each batch by hand. The whole process from scrubbing to bagging is done in less than an hour so you know our chips are fresh.”

This snack was contributed to Taquitos.net by the manufacturer. Review published June 2004.