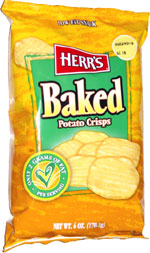 Taste test: At first glance, I figured these were the Herr's version of Baked Lay's.

In fact, several people thought these were Baked Lay's when they saw the bag in the chip bowl, as there is a definite resemblance in the bag design. But once anyone looked inside the bag, it became clear that these were not like Baked Lay's at all. The chips were loosely hexagon-shaped, like Baked Lay's, but the resemblance ended there. These looked like very thin crackers, complete with a geometric pattern of tiny holes. The taste and texture were a lot like a cracker, with a few brittle layers and some air in between. Upon biting in, there was a very light feel to the crisp. Unlike crackers, the taste was sort of potatoey, but it wasn't even close to the taste of a potato chip, and it wasn't much like a Pringle/Baked Lay either. So these had a taste all their own. They didn't taste bad, but nobody was excited about the overall experience.

From the package: “Have you been looking for a way to come back to the crispy goodness of potato chips, even though you're watching your fat and calories? Say hello to Herr's Baked Potato Crisps, the figure-friendly snack that tastes just right. Tear open a bag of Herr's Baked Potato Crisps and discover just how delicious a baked chip can be. That because we start with hearty, healthful potatoes — the same kind that go into all Herr's Potato Chips. Then we bake them slowly to get that satisfying crunch you crave. Finally they're seasoned with a gentle sprinkling of salt to bring out the natural potato flavor. The only thing missing is the extra fat and calories! ... And at just 2 grams of fat per serving, you can feel good about grabbing a handful anytime you get the urge!”

This snack was contributed to Taquitos.net by the manufacturer. Review published May 2004.