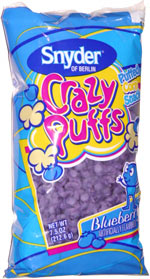 Taste test: These are sort of like cheese puffs, except that they're flavored with a sweet blueberry flavor instead of cheese, and they're shaped kind of like popcorn (but they are actually not popcorn).

They had their admirers and detractors around the chip bowl. Some people liked them a lot, and others thought they were awful. These might be better to serve to kids than to adults.

From the package: “Hey Kids! It's Barry Blueberry here to bring you a new fun-filled snack from Snyder of Berlin. Sick of plain, old snacks? I know I am! New Blueberry Crazy Puffs are a puffed corn snack with the sweet flavr of blueberries picked right from the bush. So get rid of the boring snack bag and dig into new Crazy Puffs! Soon, you'll be as crazy about them as I am.”