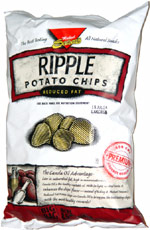 Taste test: These wide-ripped chips were very crisp and had a very good crunch.

The taste was good, but it wasn't as strong of a taste as you get with some ripple chips. Based on what it said on the label about canola oil, this could be because you're tasting just the chip and not the oil.

Smell test: Not all that potatoey, but not oily either, so not bad.

From the package: “The Canola Oil Advantage- Low in saturated fat, high in monounsaturates, Canola Oil is the healthy vegetable oil. With its light, neutral taste, it enhances the chips' flavor — instead of hiding it. Michael Season's Reduced Fat Potato Chips use Canola Oil to bring you the best tasting chips with the most healthy rewards.”

This snack was discovered by Theo. Review published April 2004.