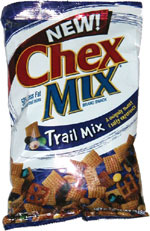 It's a good mix, with all of the elements quite eatable, on the sweet side overall. Both kinds of pretzels were light in color, far closer to yellow than they were to brown, with a good amount of salt. The fake M&Ms were slightly smaller than regular M&Ms, and they definitely tasted different, but not bad. The Chex were a surprise, as they didn't just use the standard ones you would find in a cereal box, but rather a lightly sweetened version. The raisins were small but OK. The peanuts were OK. The peanuts, raisins and fake M&Ms were underrepresented, even after I mixed it up, and they had all sunk to the bottom of the bag. Pretty good mix overall.

From the package: “A uniquely sweet & salty experience” ... “Product may have settled during shipping.” ... “50% less fat than leading trail mixes”