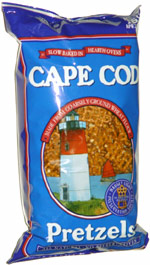 The lighthouses are a little over an inch tall, and they're good, with the usual pretzel taste and an average amount of salt..

From the package: “Without the lighthouse the United States might have followed a much different couse of history. During the 18th century, one in four New England sailors perished at sea and there were over 1000 shipwrecks off Cape Cod alone. So in 1798 Congress mandated the construction of lighthouses along our nation's shoreline to help light the way for our fledgling country. Lighthouses allowed safer travel for millions and ensured necessary food and supplies make it to port. Over the yearsm these lighthouses have become some of the nation's most beloved and visited landmarks and their stories have become part of national folklore. Unfortunately, these live-safing monuments are slowly disappearing, a victim of technological progress. Cape Cod's Nauset Light, featured on the front of this bag is no exception. As on of the most photographed lighthouses in the country, Nauset Light along is responsible for saving thousands of lives and her legacy deserves to live on.”

This snack was contributed to Taquitos.net by the manufacturer. Review published February 2004.