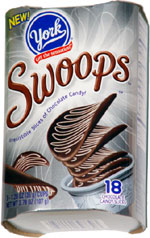 Taste test: These are Pringles-shaped sweets (slightly smaller than a real Pringle) with the taste of a York Peppermint Patty.

The package consists of three 6-packs, each individually sealed. You don't get chocolate on the outside and mint in the middle like you do with an actual York, but rather it's all blended together into the "chocolate chip." On the package, the chips look like a fancy sort of confection, with a dark color overall and a white squiggle somehow painted on. They don't actually look like the picture on the package, though. It shows big, swirly white swoops painted on the chips, but instead they've got a squiggle that resembles the design on all of Charlie Brown's shirts. The bottom of the Swoops has a diamond texture on it similar to a sweater I own. (Do you get the idea that whoever designed these used to design clothing?) They taste good, and they taste a lot like a York Peppermint Patty, but I think the mint is actually stronger in the real thing. Also, in the real thing, the neat part is when you bite in and pull apart the foamy mint center. Since there's no foamy mint center, you don't get that with these.

From the package: “Get the sensation!®”

This snack was discovered by Jeremy at Target. Review published January 2004.