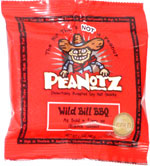 Taste test: These nuts are similar in size and shape to peanuts (these are generally a bit smaller), and some of the nuts are split down the middle like a peanut.

Unfortunately, they don't taste as good as peanuts. You would hope that the barbecue flavoring would be the saving grace, making up for the soy nuts' lack of good taste, but the flavor powder appears to have adhered to less than half of the nuts in the bag. For the ones with no flavoring, they're really quite bland, with the nondescript taste of the soy nuts. The ones with the flavoring are not so special either, as the taste really isn't very barbecuey. They're edible and not bad, but nothing I'd recommend or crave.