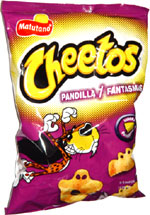 Taste test: These are different from any Cheetos I've ever seen, in several notable ways.

First of all, I normally expect a Cheeto to be a puff or a curl, or possibly some variation of a puff or a curl in special shape. These are neither puff nor curl, nor anything close. They're basically wiggly potato crisps shaped like bats and ghosts. Which brings me to the next unusual thing: They're made from potatoes, instead of the signature main ingredient of a normal Cheeto, which is corn. Having said all that, these are quite delicious and addictive snacks. They've got a great, mild cheese flavoring and a good crunch, and I just can't stop eating them.

This snack was discovered by Amitai in Barcelona, Spain. Review published January 2004.